🤓 "Together, we can find them all"
LX


Thank you for reading about this. The page is wordy and might be quite boring unless you are interested in the history of the project and why this is an ongoing development that really is only a static preview right now.

I'm very sorry for the multitude of unfinished and missing things round here. Takes a little time to get it right 🤓 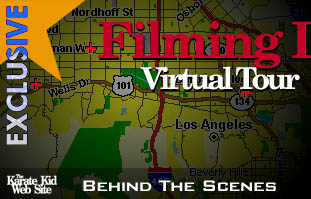 Karate Kid Locations from 1997
My very first webpage published in 1996/7 was a page about filming locations. For Karate Kid.

In fact, that page is still there [but not in any way mobile friendly, of course]. Why Karate Kid? Well, I'd always thought it had great locations and I'd found the apartment building and wanted to share.

To my amazement, this web thing was like 'Field Of Dreams', in that "If you build it, people will come." And visit they did. And we became a little club that was determined to find all the locations and we had a great journey and made some great friends. The only other page about movie locations on the entire web around that time was a similar project for 'Back To The Future.' After a while, we had found most of the locations and I thought it would be great to do this for more movies. Surely, together, we could solve all the mysteries?

The complexities of authoring web pages at the time were very different to today. Things were very crude and you just didn't have the tools and community building blocks that you do today. Basically, you wrote the code by hand in notepad or a text editor (I'm old skool btw, I still do it entirely that way to this day 🤓). This made the whole business very cumbersome for more than a few pages. I did similar pages for 'Secret of My Succes$' and 'The Last Dragon' and then started what became the Rewind and quickly realised that if I wanted to cover more movies, I was going to have to innovate.

Today there's Wordpress, Joomla and many other great choices for free. Back then, it was the peak of the "dotcom bubble" where things got crazy and if you had such a product, it carried a five (or six) figure dollar pricetag that only blue-chip companies and well funded startups could afford. So, in 1999, I developed my first relatively crude Content Management System, called it Pagebuild and launched the 80s Movies Rewind.

Problem was, that the web technologies just didn't exist to automate anything much better than text coverage of movie locations, so it never was anything really like the old Karate Kid page.

The Rewind grew and grew and my Pagebuild CMS was creaking. It just couldn't do stuff that I wanted. So I made a wish list and spent like 3 years (actually, it just went on forever 🤣) writing by hand this vast new monster that I called C21. It was going to do all these wonderful things and one of them was locations done right. Pretty soon I'd realised that to do it properly was gonna require a special inclusive CMS and the idea of LX was born.

And so C21 included a crude version of LoX that never got anywhere near finished --or used to publish anything. I just couldn't see how to get the job done right with my skills & the web technology of the time. In late 2008 after developing v3 of the Rewind, I had a serious go at rewriting it from scratch before giving up for the same reason. By 2015 the Rewind was well past the expiry date and had sadly languished seemingly oblivious to the smartphone revolution. Life had got in the way. Nevertheless, I was still determined that LoX would see the light of day and knew that the passage of time had introduced many web technologies that made it possible to achieve my original vision from the late 90s.

Not least of which were Google's awesome Mapping/StreetView API's

So, in 2014/15 I redesigned and rewrote the LoX core basically from scratch (yes, in a text editor 🤣) for the third time. And then, in the background, started using it to add locations to see how well it worked and refined and refined it.

Then at some point Google announced that their mapping API was moving to a chargeable model and it all went sour for LoX.

So then, in 2018 I redeveloped the Rewind. C21 was upgraded and the site changed into the version it basically is today.

Then, around the middle of this year (2020) I was inspired again to finally, once and for all, get something working.

And that's where I found myself. As the Covid thing has gone on, I'd been pulling 12+ hour days on this for like months and just wanted to get something done for Xmas.

So there it was. More than 20 years in the making. Incomplete, static and far from perfect, with so much still to do. But a step closer to my original 90s ideal of a system that will allow us to build a community finding, sharing and visiting movie locations with everyone getting proper credit for their discoveries*. Together, we can find them all...

Sorry if all this history was a TMI, but I wanted to explain that this represents a personal long standing dream for me.

Special thanks to Paul Shrimpton and Eric Wright who moderate the forums. Thanks guys. Thanks also to all the members of the forums and the people who post site updates to the Rewind.

To the millions who have visited, encouraged and supported the Rewind. -Without you, none of this would have happened. A big 'thank you' to everyone.


All My family & friends and their unflagging patience & moral support. This really has been a labor of love. I'm sorry that I just haven't been as sociable as I should as a result... Chris Smith for doing the server admin UNIX stuff; 'Aunty' Wendy for your gracious support. Simon Barber, a good friend from the days of the Karate Kid page. Garrett Grimshaw for your encouragemnent and sharing some of your great locations discoveries; Stuart Fitzgerald, my cousin, founding contributor and all-round good bloke. You're the Guv!

Dedicated to all of you

Please Share The 8s Lcations
Support this spam free and non-commercial site
Copy
Thank you for sharing us!